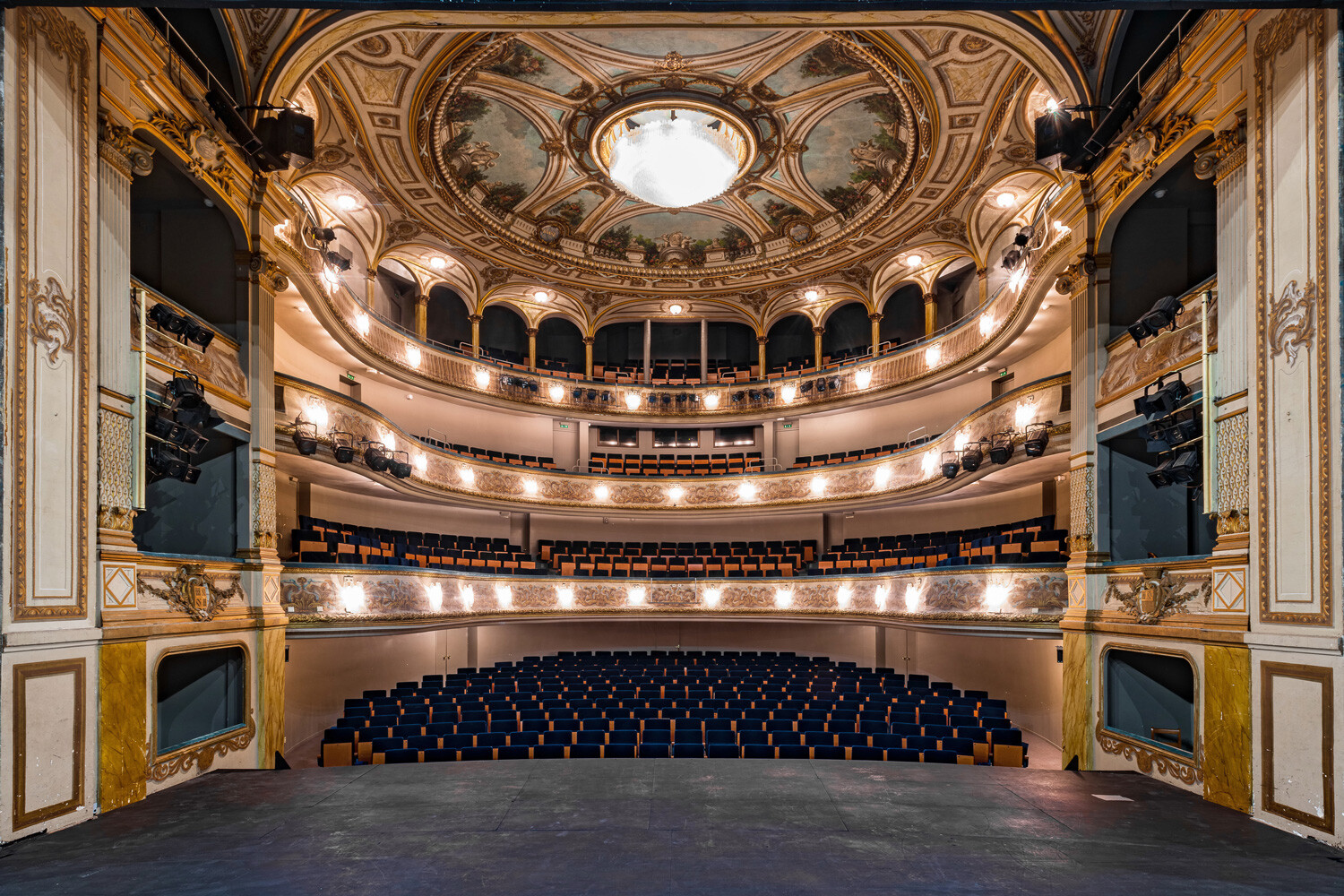 Placed at the heart of the historic centre of Dijon, the Grand Theâtre occupies a key position at the cultural heart of the city. Built in 1828, the Grand Théâtre offers excellent conditions to hear and see performances, within the intimate frame work of human-scaled Italianate amphitheatre. Dijon Opera’s programme of opera, music and dance here find a place for national expression.

Did you know? There is another beautiful place which is part of the Dijon Opera : the Auditorium. Discover this contemporary theater now! 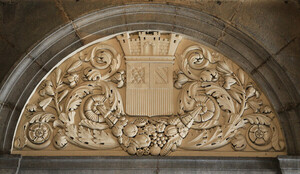 Inspired by classical antiquity, as was fashionable under the 1st Empire, the Grand Theatre was constructed on a rectangular footprint, with a peristyle façade made up of eight Corinthian columns that support an entablature topped with an attic.

The decorations were executed in 1828 by Moench. The coat of arms of the Courtivron family was placed on the tympani of the vestibule and repeated, with their compass, on the friezes of the foyer. The interior ornamentation and the stage curtain were entrusted to Ciceri, the famous decorator of the Paris Opera. The knotted ash furnishings of the foyer were comissioned from Werner, decorator to the king, and the cornice was designed by the talented Devosge.

The Theatre measures 61m in length, 22m in width and about 17m in height. It boasts a semi-circular Italian-style hall, with 3 levels of galleries and proscenium boxes. It benefits from modern equipment: climate control system, automatic fire detection by electronic eye, sound reinforcement and closed-circuit television … It holds 692 seats.

The chandeliers are made of Murano crystal and date from 1900. The main chandelier from the ceiling of the main hall measures 2.70 m in diameter and 1 m in height, it weights 700 kg, and has 2000 Venetian glass tubes. That of the vestibule measures 1.75 m in height and 80 cm in diameter and includes 860 elements. Those of the foyer on the first level measure 1.60 m in height and 1.40 m in diameter. They each include 150 elements and weigh 350 kg. The hall lighting is complemented by 29 wall sconces on the balconies.

The decoration of the hall’s ceiling is the work of Ciceri.

On each side of the hall, we find allegories representing the arts (angels, dancers, musicians, etc.) with the coat of arms of the architect on one side and those of the City of Dijon on the other. 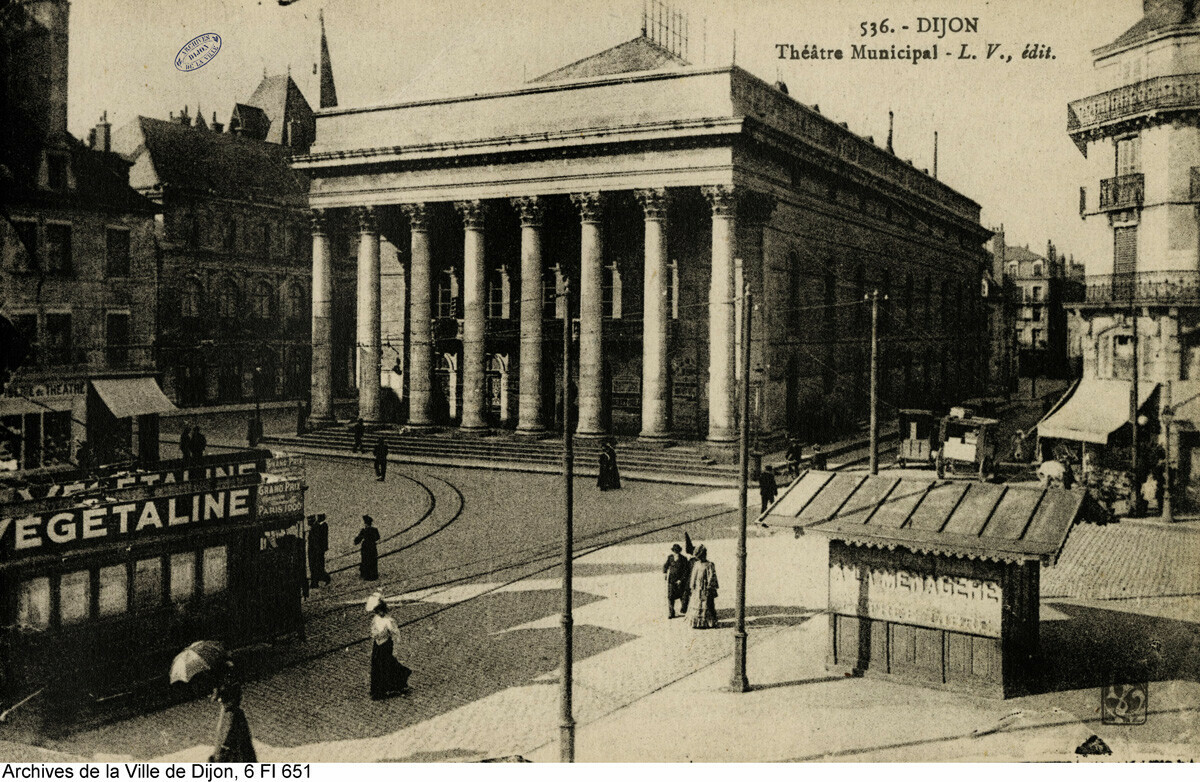 Dijon’s first concert hall appeared in the 18th century. Prior to this date, the various itinerant troupes that passed through the city gave their performances in public houses, notably that of La Poissonnerie, famed for having hosted in 1630 the meetings of Mère Folle. In 1717, the municipality acquired one of these houses, Les Barres, situated on the Rue du Grand Potet – currently Rue Buffon – and transformed it into a Comedy Hall. The conditions for performance were obviously very far different from those we know today. It was not until 1817 that the Dijon public was offered the comfort of seats: up to that date, all performances were given before a standing public. The city dreamt, however, of creating a Grand Theatre that would fully live up to that name. In 1802, the destruction of the Sainte Chapelle and its cloisters liberated a sufficiently large amount of space to permit such a project. The site of the former cloisters was chosen to host the new hall, while that of the Sainte Chapelle became the Place de la Comedie – today Place de la Sainte Chapelle. The Dijonnais architect Jacques Cellerier was invited in 1803 to submit his proposals, and the Municipal Council on 18 November 1809 voted to adopt his plans.

On 2 December 1810, M. Lecoulteux, Prefect of the Department, and M. Durande, Mayor of Dijon, laid the first stone. But soon political events intervened – in this case, the fall of the empire – and work was suspended in 1814.

The project was not relaunched until 1823, under the municipal administration of the Marquis Le Compasseur de Courtivron. Jacques Cellerier having passed away in the interim, the Parisian architect Valût was called upon to take up management of the works, still using the plans of his predecessor, with the indispensable interior designs. Construction lasted 5 years, until 1828

The Dijonnais poet Charles Briffaut, member of the Academie Française, was asked by the Municipal Council to write a play, Les deguisements, ou une folie des grands hommes, for the inauguration on 4 November 1828, the king’s day.

A few dates:
1802: destruction of the Sainte Chapelle and its cloisters, future site of the theatre (former show hall: public house on the rue Legouz Gerland).

1803: proposed plans for the new theatre by Jacques Cellerier adopted.

Duration of construction: 8 years (begun under the 1st Empire and terminated under the Restoration of Charles X). 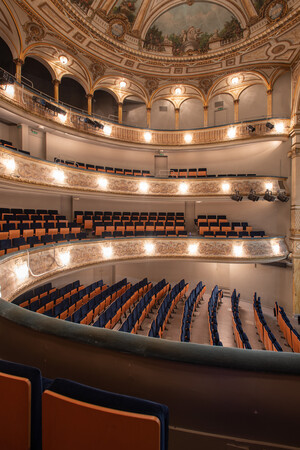 Since its construction, the Grand Theatre has benefited from numerous projects to adapt it to the latest technical advances.

A first general restoration was undertaken in 1855 by the architect Charles Suisse and the painter-decorator Cambon. In 1900, electricity was brought in to replace gas, which was originally used to heat and light the building.

In 1934, the city’s architect Georges Parisot was put in charge of a new restoration, of which the most significant renovation consisted in the reconstruction with reinforced concrete of the 1st balcony and the orchestra pit.

In 1954, the stage was raised and rebuilt, and a lighting booth installed. These works were directed by Georges Gendrot, the city’s architect.

In 1969, Dr. Veillet, Mayor of Dijon, decided to proceed with the restoration of the entire theatre, with the exception of the stage. The job of overseeing the works was entrusted to Mr. J.F. Devalare, the city’s chief architect, and his deputy, Mr. Grangy.

Work began on 31 March 1970: the heating system was replaced with a climate control system, which required the drilling of a great many holes in the massive stone structures that separated the hall from the stage. The passage of conduits required the removal of the flooring from the orchestra pit and the rows of seats in the balconies. The electrical installations were entirely overhauled to bring them up to safety standards. The foyer was renovated, as well as the bar for the 3 galleries. The decoration is the work of Mr. J. Bourgoin, decorator from Monaco, who managed to recapture the spirit of the 18th century. Only Ciceri’s ceiling was not changed but simply restored. These works were completed at the end of October 1970 and the theatre reopened on 3 November 1970 with a performance of Rigoletto.

In 1981, a new lighting and sound booth was installed in one of the proscenium boxes.

In 2005, the Municipal Council voted a new renovation. This time the seats were entirely replaced with models that are wider and more comfortable, and blind spots were completely removed, as were the boxes of the first balcony. To improve the acoustics, mural cloths and carpeting were removed. Fire walls were installed for the orchestra pit to bring it up to standard, the pillars and posts were reinforced and the metallic plating of the grill was redone.